Everybody that knew her, describes the 30-year-old Anthea Thopps as having a sparkling personality; always smiling and laughing. On Saturday, the dedicated mother of three-year-old Shaye, was found dead; a beautiful soul taken by an act of cruel and demented criminality.

Adding to this tragedy was the fact that Anthea’s body was discovered by her mother. The grieving mother came upon the horrifying sight of her daughter llying partially nude on the floor, with only a t-shirt covering the upper part of her body. This suggested that she might have been sexually assaulted.

Anthea has been described by those that know her as being a reserved young lady who enjoyed laughing and was always friendly and respectful towards all who came into contact with her.

Beaufort West has been described by its residents as having become increasingly infested with gangs and drug dealers over the last few years. They have had enough and are calling for a march on Friday.

The organiser of the march, Brian Jooste, has already received approval by the municipality for the march to take place (26 July, Friday). He stated on his Facebook profile that the march is intended to address the increasing problem of violence against women and children in Beaufort West.

If you have any information that can help the police find the criminals, you can contact Detective Chris Okkers at 0786515256.

You can read below some of the social media comments from Beaufort Westers on the life and death of Anthea Thopps, as well as the crime situation.

And Finally, a poem that Anthea posted on her Facebook profile, a month before her death. 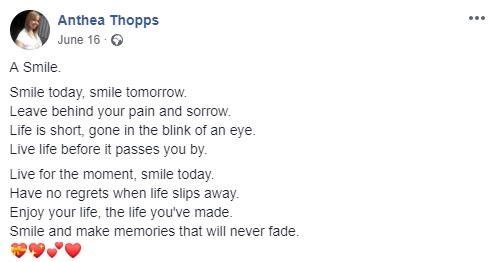 For the Latest Stories Sent to your Email, Subscribe to our Newsletter